YONKERS — It was sloppy.

But it also might have been a game for the record books.

When the Yonkers Force and Yonkers Brave walked off the football field at Roosevelt High School Friday night, the scoreboard displayed 61 points, 42 of them belonging to the Force.

Not one was scored through the air. In fact, not a single pass was tossed by either team.

But three touchdowns came off run-backs of fumble recoveries.

You don’t see that every day. 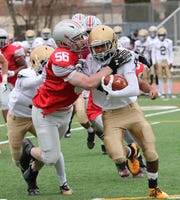 The Force went up 7-0 in the first quarter on a 12-yard Ryan Joseph run and an extra point kick by Sherif Abouhatab, who had a busy game with six PATs.

The Force seemed on their way to making it 14-0 before coughing up the ball on the Brave 18, where one of the fastest players on the field, the Brave’s Chris Needham, scooped it up and romped 82 yards for the score. A failed PAT left the Force up 7-6.

But the Force offense got stronger as the game went on.

A 10-play, second-quarter drive that began on their own 45 ended in an Eliajah Cordero 22-yard touchdown run on a third-and-11 play.

Only 3:45 remained in the first half but the Force and Cordero weren’t through.

The Brave were on their own 35 when a hit by the Force’s Nana Asante caused a fumble that Phylip Knowles pounced on at the Brave 30.

Back-to-back 9-yard runs by Ja’mhi Jackson and Joseph put the ball on the Brave 12, where, one play later, Cordero scored off right tackle.

That, effectively, was the game with the PAT making it 21-6 at the half. 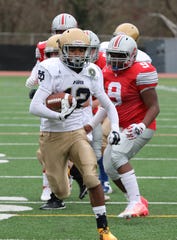 Player of the game

Cordero, with his big-yardage, slashing style of running, was also the overall player of the game, although a big nod could also be given to the Force defense, which until subs were on the field late, dominated the Brave’s offense.

It didn’t help that starting Brave QB Dajour Holmes was on the sideline in a sling after breaking his collar bone last week against Port Chester and that halfback Aaron Sarmiento, who filled in for him, went down with a game-ending injury early in the third quarter.

But it was the Brave’s running game, particularly off the option that lifted the Brave over the Force in last year’s Superintendent’s Cup game and the Force shut down that play for most of the game.

“I was really pleased with the effort and discipline we showed defensively,” said Dan DeMatteo, who has coached the Force since its founding three years ago and previously served as Gorton’s longtime coach before Yonkers reduced its high school football teams to two. 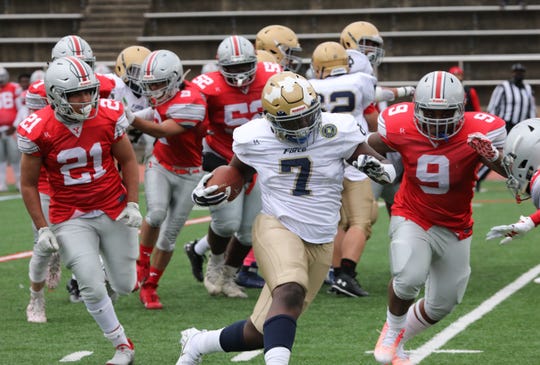 Defense was key again to the Force’s fourth score.

Between the Force’s penetrating defense and penalties, the Brave, who took possession of the ball on their own 33 with 9:59 left in the third quarter, were pushed back to their 15 and, on fourth-and-forever, punted. But big Michael Wszolek barreled in to block the punt. One play later, Jackson rumbled in for a 3-yard score.

On the ensuing series, the Brave wasted Joshua Williams’ 33-yard kickoff return to their 42 when they fumbled the ball on the next play and Malachi Keels picked it up and streaked down the left sideline for a 48-yard touchdown.

And before the third quarter ended, special teams again lifted the Force and buried the Brave.

Halfback Emmanuel Romero, who had taken over the QB duties for the Brave, also became their punter. But, while lined up to punt deep in his own territory, he couldn’t handle a poor, rolling snap and fell on the ball. A few plays later and Joseph scored off the right side from 8 yards out to make it 42-6 (after the PAT) with 2:25 left in the quarter.

The Brave made some noise before the game ended with Needham running 20 yards off the left side for a touchdown after taking a pitch at the Force 20. That play followed Williams’ 52-yard, spinning run. Delaney Dundes added the PAT.

And the Brave scored again with the Force fumbling around their own 22 and Jhan Rosario recovering the ball and running it in for the TD.

Kane, who hobbled post-game with a calf injury, said his team must improve its offensive play.

“They got the ball with good field advantage and that’s what killed us,” he said.

Cordero, who also had a strong defensive game, said, “We all trusted each other. Everyone made mistakes, including me, but we came back up and ran harder.”

Joseph said his team was faster and dominated the line of scrimmage.

But he attributed the win to more than that.

“We love each other. We’re brothers. (It’s because of) the heart and love we have for each other,” he said.

He added winning the cup “means everything to us.”

“He was important to me,” DeMatteo said. “He was tremendous to us. He spoke to us twice. The kids had a real bond with him. This is a tradition we’ll carry forward.”

Nancy Haggerty covers cross-country, track & field, field hockey, skiing, ice hockey, girls lacrosse and other sporting events for The Journal News/lohud. Follow her on Twitter at both @HaggertyNancy and at @LoHudHockey.

Politicians say one of the best issues! – Yonkers Instances

Why Doesn’t the GOP Go After the “Squad”? By BOB WEIR – Yonkers Tribune.

Clear Home windows With out the Stress – A Skilled Window Washing Service is...

admin - April 21, 2021
0
Dreading washing your home windows? Sick of dirty, discovered panes? Ready to have them glimmer and also beam? After that, it's time to call...

Politicians say one of the best issues! – Yonkers Instances

admin - May 10, 2021
0
City of Yonkers, legal notices Me, Mike Khader, councilor The President of the City of Yonkers hereby convenes a public hearing for the Proposed capital budget for...
Yonkers, New York